The Restraint of the Insane

Posted on May 15, 2014 by Cambridge Library Collection

I would guess that if I said ‘William Hogarth’, the image popping into your mind would be either ‘Gin Lane’, or the Bedlam scene from ‘The Rake’s Progress’. In the latter, the culmination of the decline and fall of a foolish young gentleman is his incarceration in the Bethlehem Hospital for the insane, then at Moorfields, just outside London. As the keeper hammers the shackles on to Tom Rakewell’s ankles, the other inmates, some chained, others not, are on display for the entertainment of two fashionably dressed ladies who are passing an idle few hours in the popular pastime of visiting the lunatics. 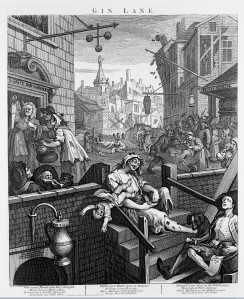 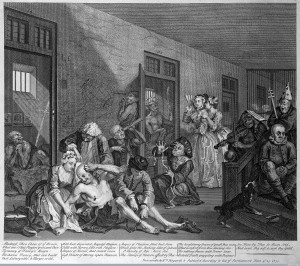 Hogarth’s morality tale had less success in improving the lot of the insane than his work for the Foundling Hospital. In 1814, an enquiry into the conditions at Bedlam took evidence from the Quaker Edward Wakefield (father of the enthusiast for New Zealand) that an American, James (or William) Norris (how significant that the poor man’s first name is uncertain!), in the ‘incurable’ ward, had been chained to his bed for twelve years (see below). 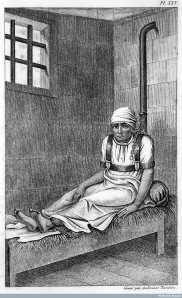 William Norris, shackled on his bed at Bedlam. Credit: The Wellcome Library, London

At the same time, more humane treatment was being promoted, especially by the Quakers, whose York Retreat was founded in 1796 as a specific alternative to/protest against the hideous conditions found in the ‘official’ York Asylum. Restraints of all sorts were kept to a minimum, and the inmates were encouraged to read and write, and to wander and garden in the spacious grounds (bounded by a ha-ha rather than by a visible wall), which also contained animals for them to care for.

However, conventional, ‘professional’ medical opinion ignored these humane proposals, and although the scandal generated by Wakefield loosened the severity of the restrictions at Bedlam and elsewhere, restraint was still regarded as an inevitable and necessary part of ‘treatment’.

Enter John Conolly (whose biography was published in 1869 by Sir James Clark). Born in 1794, brought up in genteel poverty (his mother was a relation of the Tennysons), and poorly educated, he joined the army at eighteen, was discharged at the end of the war in 1815, married in 1816, and needed a profession. He trained in medicine at Edinburgh, where his dissertation was on mental illness: ‘De statu mentis in insania et melancholia’. With no money and no ‘interest’ to establish him in London, Conolly started his medical career in Sussex, then moved to Stratford-on-Avon.

But ‘interest’ eventually materialised: Henry Brougham (coming soon!), whom Conolly had known in Edinburgh, offered him the post of professor of the nature and treatment of diseases in the new university of London in 1828. It did not turn out well: along with many others among the academic staff, Conolly clashed with Leonard Horner, the warden of the university. More importantly, he was not a compelling lecturer, and he failed to obtain private patients in London. In 1830, he resigned his post, and retreated (with his wife and now four children) to Warwickshire, seemingly destined for obscurity.

In 1838, he surprised his friends by applying for the post of superintendent of the Middlesex County Lunatic Asylum at Hanwell. He did not get the job, his ‘progressive’ views being considered inappropriate by the electing committee. But the army surgeon who did was forced to resign after a year of disorder and chaos, and Conolly was appointed in the autumn of 1839. Within an astonishingly short time, Hanwell had become a byword across Europe for the abolition of all forms of restraint and a more humane (though desperately overcrowded) regime.

Ironically, Conolly ‘s reforms did not lead to a significant increase in the number of cures achieved during his period as superintendent. Even more ironically, although he was hailed as the great and compassionate reformer, he was not the first to abandon restraints. As well as the pioneers of the York Retreat and other private asyla, two doctors at the Lincoln Asylum, Edward Parker Charlesworth and Robert Gardiner Hill, had started loosening the restraints endured by their patients in 1827, and Conolly had actually visited and noted his approval of their procedures.

This led to an unfortunate pamphlet war when Conolly’s fame grew, with Hill especially resentful of the praise piled upon Conolly as a great humanitarian. It is probable that Hanwell’s proximity to London, and the huge size of the asylum, meant that Conolly’s methods commanded greater attention than would have been the case with a small provincial asylum. There is a famous picture in the Illustrated London News for January 1848 of the happy inmates at Hanwell celebrating Twelfth Night: a small group of ladies and gentlemen look on with approval at the decorated dining hall with its tables stretching almost to infinity. 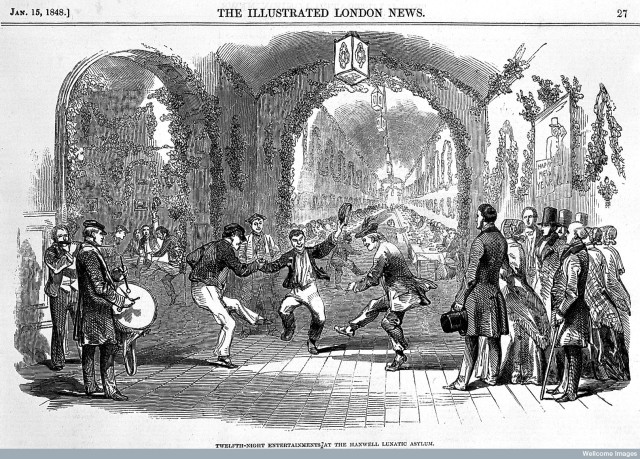 The reforms instituted by Conolly at Hanwell spread. Elizabeth Rigby visited Bedlam in 1844, not to be entertained by the lunatics, but to feel ‘the sense of gratulation at the pervading humanity, benevolence and judgment of the institution’. She was accompanied by Lord Shaftesbury, the great philanthropist, who was soon after elected permanent chairman of the Lunacy Commission, and who knew ‘all the patients, and all him’.

Conolly resigned from Hanwell in 1844 (after a row with the with the Middlesex magistrates over the management of the asylum) and went back into private practice. In 1856 he described his theories and practice in The Treatment of the Insane without Mechanical Restraints, though by this time his ideas, outrageous twenty years before, had become regular practice, and – though, alas, there are always exceptions – a humane regime for the mentally ill became, and remains, the expectation, and their right.

3 Responses to The Restraint of the Insane