I can state with absolute conviction that until 10 a.m. or so on the morning of Friday 26 September 2014, I had never heard of Chitqua. Then I received a tweet from the ODNB (@odnb) announcing that one of the 120 new lives added to this fantastic online resource this month was Chitqua, an eighteenth-century Chinese artist who visited London. Strange name, I thought, must read about him over the weekend. Then at about 6.30 p.m., I had one of those CLC Moments.

I was skimming through the contents pages of the eight-volume Illustrations of the Literary History of the Eighteenth Century (1817–58), Consisting of Authentic Memoirs and Original Letters of Eminent Persons: and Intended as a Sequel to the ‘Literary Anecdotes’, of which the first four volumes were published by John Nichols, and the remainder by his son and grandson after his death. I have written about the Literary Anecdotes recently, and we will be reissuing the Illustrations later in the autumn. (The reason I was looking at the contents pages was that I’m writing the blurbs and needed to find out who and what was in each volume.)

Anywhere, there it was in the contents list of Volume 5, page 319: ‘An account of Mr Chitqua, an Ingenious Chinese Artist’. The letter, dated 3 August 1770, was addressed by Richard Gough, the antiquarian and topographer – whose Anecdotes of British Topography we have reissued, along with a catalogue of the books he bequeathed to the Bodleian Library – to his friend Benjamin Forster. ‘I have had the pleasure of conversing with a genuine native of China. You may have heard of one Mr Chitqua, an artist, whose figures or busts moulded in clay, have been exhibited at Pall Mall…’

Gough goes on to describe Chitqua’s lodgings (with a hatter on the corner of Norfolk Street, near the Strand: presumably the one that used to run between Arundel Street and Surrey Street), his grasp of English, his exotic costume, and his thoughts on England. The industrious Nichols adds a footnote saying how rare the visit of a Chinese was in Europe at that time: a predecessor of Chitqua named Loum Kiqua went to Portugal in 1755, and survived the Lisbon earthquake and unkindness at the hands of the Portuguese, to arrive in 1756 in London, where he was ‘seen by His Majesty and the rest of the Royal Family, most of the Nobility, etc., by whom he was much caressed’. The East India Company then carried him home, at his request, to Canton.

On the next page, there is an extract from the Gentleman’s Magazine for 1771, giving more information about Chitqua, and the unfortunate sequence of events which dogged his first attempt to return to China. It adds: ‘He is remarkably ingenious in forming small busts, many of which carry a striking likeness of the person they are designed to represent.’ (So not like the present-day Madame Tussaud’s, then.)

Only one firmly attributed sculpture by Chitqua appears to exist in Britain, at the Museum of London. You can see it below, but also on this video clip, where Dr Pat Hardy, the author of the new ODNB bio, talks about him. Interestingly, there are two more in the wonderful Rijksmuseum [beware, this link is noisy!] in Amsterdam (best breakfast EVER in the café), one of which (by another coincidence) is Andreas Everard van Braam Houckgeest, whose two-volume Authentic Account of the Embassy of the Dutch East-India Company, to the Court of the Emperor of China, in the Years 1794 and 1795 we do. 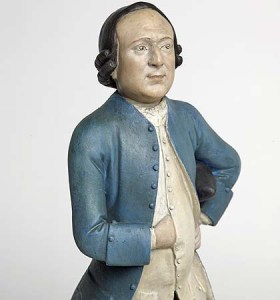 Even more extraordinary, Chitqua appears in one of the most famous pictures of artists being artists of all time: Zoffany’s group portrait of the founding members of the Royal Academy, now in the Royal Collection. This is the one where John Hunter is lecturing on (male) anatomy, with nude models: unthinkable that the two founding lady members of the Academy (Angelica Kauffman and Mary Moser) should be present, so they are represented by portraits on the wall (neither has the nude men in her sightline). Sir Joshua Reynolds, wearing his characteristic thick-rimmed glasses, stands in front of the model, but on the left, in the back row, and visible among the grey-wigged Englishmen, is Chitqua, in a ‘Chinese’ cap. 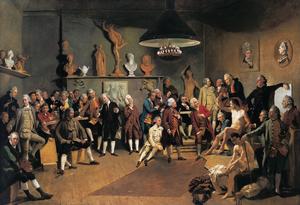 The Academicians, by Zoffany, with Chitqua on the left in the back row. Credit: The Royal Collection, (c) Her Majesty Queen Elizabeth II

Enlargement of a portion of Zoffany’s picture, from a later print. Chitqua is attending to the lecture, unlike the two gentlemen on either side of him. Credit: The Wellcome Library, London

The Illustrations, like the Literary Anecdotes, are full of random notes about the literary great and good of the eighteenth century: some, like Newton and Pepys, very well remembered; others, mostly earnest divines, now completely obscure. There is a lot of Gough, and a lot of Bishop Percy, whose Reliques of Ancient English Poetry, which influenced Wordsworth and Coleridge among hundreds of others, we will be reissuing later this year. Boswell and Johnson, Joseph Priestley, David Garrick, Lewis Theobald, Sir Joseph Banks, Robert Burns, Richard Pulteney, Jonathan Swift, Anna Seward, Thomas Dibdin – I could go on…

And by the way, Chitqua’s name should be Tan-Che-Qua, according to the ODNB!