‘I have been very busy of late; and have at length put my last hand to my Nat[ural] Hist[ory] and Antiquities of this parish. However, I am still employed in making an Index; an occupation full as entertaining as that of darning of stockings, though by no means so advantageous to society.’ Thus Gilbert White, writing to his nephew Samuel Barker, on 8 January 1788.

White often totted up the numbers of his nephews and nieces: including those acquired by marriage, and the resulting great-nephews and great-nieces, the total in July 1791 was fifty-eight. Much of this two-volume ‘life and letters’ of 1901, compiled by Rashleigh Holt-White (1850–1926), great-great-nephew and self-appointed keeper of the flame, is made up of his letters to these relatives, as well as to his brothers and sisters, and the letters to White from his friend John Mulso, brother of the more famous ‘Hecky’, later Mrs Chapone. 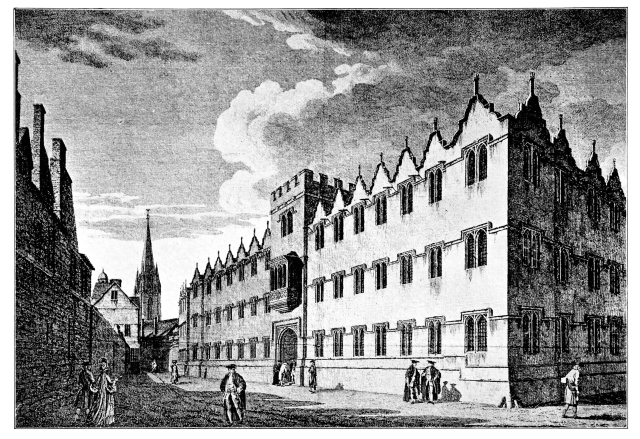 Oriel College, Oxford, in the eighteenth century, from Vol. 1

The two men kept up a lifelong correspondence, and met as often as they could, after first encountering each other as students at Oriel College, Oxford, in 1744. Sadly, White’s letters to Mulso were destroyed at some point, but Holt-White uses Mulso’s to White here, and published a selection of them in 1907, as being ‘almost the only contemporary illustration of Gilbert White’s character and career’.

He suggests that Mulso functioned as Boswell to White’s Johnson, but the comparison doesn’t seem apt: the two men were contemporaries, rather than mentor and acolyte, and Mulso was certainly not writing with a view to publication. His quoted letters are mostly light-hearted, and frequently teasing. Indeed, Holt-White himself remarks disapprovingly: ‘Like so many of his contemporary clergymen in the eighteenth century, his view of life was not perhaps a very dignified one.’

Indeed: when White was elected to the post of Junior Proctor at Oxford in 1752, Mulso had a plan to visit him there from his parish of Sunbury in Surrey, with his sister and his fiancée, but: ‘I must own it would have an odd sound, when the Provost [of Oriel] sends to know what noise that is in his college at One in the morning, to have him answered, “Sir, it is the Proctor with two girls and the mad Parson of Sunbury.”’

The King Charles’ Head of Holt-White’s account is his determination to prove, against various accusations to the contrary, that White was perfectly entitled to keep his Oriel fellowship throughout his life, even though both statute and more general expectation indicated that it should be relinquished once a certain level of prosperity had been achieved. (The ancient rule that college fellows could not marry was originally based on clerical celibacy, but more recently on the assumption that if you could afford to marry and set up an establishment, you no longer needed the support of your college. Mulso was engaged for ten years before he found a clerical income sufficient to enable him to marry.)

Holt-White was of course writing fifty years after the great reform movement which shook up the custom and practice of the ancient universities, and even longer after the equally dramatic changes which ended centuries of complacent pluralism in the church of England. Mulso’s enthusiastic and unabashed pursuit of preferment (via his uncle the bishop) for purely secular reasons, such as the need to support his growing family, is clearly distasteful to Holt-White, and he is at pains to emphasise by contrast the simplicity of White’s life and the steadfastness with which he carried out his clerical duties. 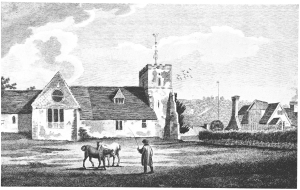 White acted as curate-in-charge at Selborne during the vicar’s absence, and he was also curate of the neighbouring parish of Far[r]ingdon for twenty-five years, riding over every week to perform the services, and frequently cancelling planned visits elsewhere because he could not get cover for his duties there. (An interesting point about his journeying was that he got extremely coach-sick, and always preferred to travel on horseback when it was practicable to do so.) He was offered ‘richer’ parishes in Oriel College’s gift, but refused them all as he would have had to take residence, and he had clearly decided that Selborne, as well as being his home, had also become his life’s work. 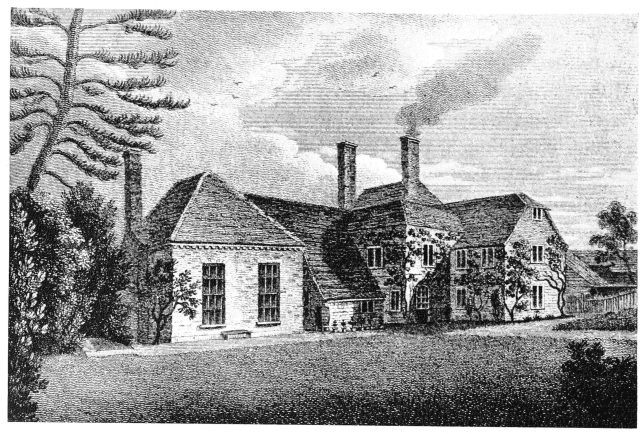 Gilbert White’s house, ‘The Wakes’, from the garden

The view from the garden to the famous ‘hangar’

The books give a clear account of his development as a gardener and naturalist, from his purchase of Philip Miller’s Gardener’s Dictionary in 1743 to his well known correspondence with Thomas Pennant and Daines Barrington, which ultimately led to the publication of his masterpiece, and with Joseph Banks, for whom White had unqualified admiration. It also reveals the natural-history pursuits of his brother John, who became chaplain to the army at Gibraltar, and made a thorough study of the wildlife there, which sadly was not published: John died in November 1780, and his manuscript appears to have been lost.

Another brother, Benjamin, was a publisher, at ‘Horace’s Head’, 51 Fleet Street, London: he was of course the publisher of his brother’s book, which family and friends were very anxious to see come out. Mulso especially complained that White was spending far too long over the ‘Antiquities’ section, which nobody would want to read…

Both volumes are illustrated with portraits and views: but there is one noticeable absentee: Gilbert White himself. Apparently, he never sat for his portrait – Holt-White scotches the theory that he was badly disfigured after the bout of smallpox at Oxford during which Goody Marshall from Selborne was sent for to nurse him, and provides a fascinating list of White’s ‘expenses in the Small-pox’. He just never seems to have got around to it: but according to the ODNB, there are two contemporary sketches. When White graduated B.A. on 30 June 1743: ‘The guest at the ceremony was Alexander Pope and he presented to White a copy of his own translation of Homer’s Iliad, in six volumes which are now in the British Library and contain the sole authentic likenesses of White; two sketches, in volumes 3 and 5, were ‘penned by T:C:’, most probably Thomas Chapman of Trinity College, Oxford, with whom White played chess and later shared proctorial office in the university.’

White’s grave in Selborne churchyard, from an image in Vol. 2

This work is a delight from start to finish: it has driven me to Mulso’s letters, and back to the Natural History, as well stirring up thoughts of revisiting the hills of my native Hampshire – though potential visitors are warned that ‘Hambledon [at this precise time becoming the birthplace of cricket, and home of the splendid Bat and Ball pub] is a place that I have a strong dislike to, on account of its morals and dissipation’.

3 Responses to Gilbert White of Selborne