A Child’s History of England

The paths of the Cambridge Library Collection and Charles Dickens have crossed several times – remarkable, given that Dickens is (of course) one of Britain’s greatest novelists, and we don’t publish much fiction. But of the short experimental (for us) series of ‘Fiction and Poetry’ we have reissued, Dickens’ A Christmas Carol is undoubtedly one of the stars. Our various incarnations of Great Expectations – manuscript, serialisation and first book edition – have attracted a lot of attention, and then there are the works about Dickens: Forster’s unsurpassed (in many respects), biography, Dolby’s recollections of the famous performing tours, the edition of (some of) his letters, and his daughter Mamie’s My Father As I Recall Him.

We have also reissued some of his non-fiction. The notorious two-volume American Notes for General Circulation of 1842, which (along with the serial publication in 1843–4 of Martin Chuzzlewit), caused such outrage, was dedicated to ‘those friends of mine in America … who, loving their country, can bear the truth when it is told good humouredly, and in a kind spirit’. This was optimistic: it rather ended the love affair during which New Yorkers had clamoured for the final installment of The Old Curiosity Shop, gathering on the wharf to shout ‘Is Little Nell dead?’ (Spoiler alert: she is/was.) But happily, good relations were restored, and Dickens’ reading tours in America in 1867 and 1868 were hugely successful.

In 1844, the burgeoning Dickens family had left England for northern Italy, eventually settling in Genoa. This tour seems to have been not unconnected with the lower cost of living in Europe, but it led to the publication of Pictures from Italy in 1846. Based on notes and letters to Forster and other friends, this is a highly romanticised view of a not yet united country, where even the dirt is picturesque, Verona is fair, and Venice is a dream-vision.

Rome, the Colosseum, from ‘Pictures from Italy’

He also wrote two non-fiction works for children, The Life of Our Lord (1849), and the three-volume, though small-format (for childish hands) A Child’s History of England, originally serialised in Household Words between 1851 and 1853. The book version is dedicated ‘to my own dear children, whom I hope it may help, bye-and-bye, to read with interest larger and better books on the same subject’.

Volume 1 opens with a useful ‘table of reigns’, beginning with Alfred the Great, but the first two chapters are pre-royal: ‘Ancient England and the Romans’, and ‘Ancient England under the Early Saxons’. My own ‘child’s history of England experience’ rather ignored anything pre-1066, which I have always regretted (not least in those wild moments when I wondered why on earth I was studying Classics and not Anglo-Saxon, Norse and Celtic). However, I do remember a Ladybird book in which King Arthur burnt the cakes, but I thought this all happened in East Anglia, which suggests I was getting him confused with Hereward the Wake (only 200 years apart, a mere nothing in first-millennium, Dark Age terms).

Dated history begins with Julius Caesar in 55 BCE, and skips on quite rapidly: ‘It is but little that is known of those five hundred years; but some remains of them are still found. Often, when labourers are digging up the ground … they light on rusty money that once belonged to the Romans.’ Plates, goblets and pavements are also mentioned, in anticipation of Charles Roach Smith a few years later. (And, N.B., Dickens calls the builder of the Roman Wall Severus.)

However, ‘The Romans had scarcely gone away from Britain, when the Britons [no query as to who the Britons were, exactly, at that point] began to wish they had never left it.’ Yes, it’s the Saxons, but after 400 years (and one chapter) of the not-so-good Saxons, we get to 871 and the ‘good Saxon Alfred’. Then more Saxons until Canute, the Dane with tidal issues, in 1016, and the build-up to 1066: ‘England under Harold II, and conquered by the Normans. All in the same year.’ 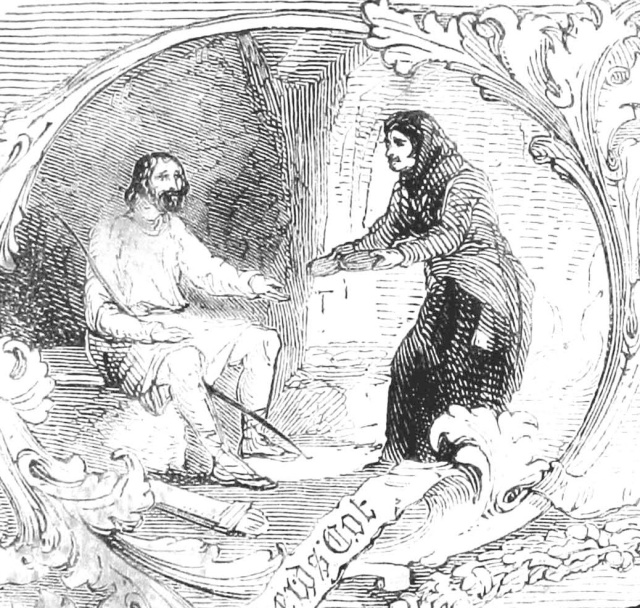 King Alfred and the accusatory cakes, from the frontispiece 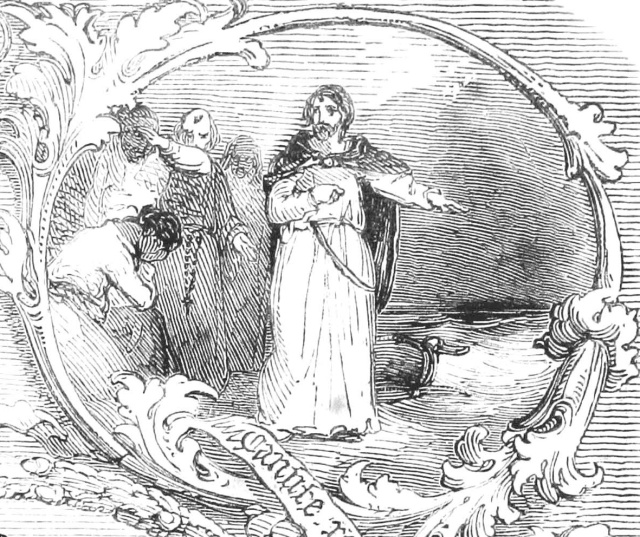 Canute, some courtiers and some waves, from the frontispiece

Volume 1 then takes us up to the end of the reign of King John, scattering value judgments like confetti: ‘He [Hardicanute] was a brutal King … He fell down drunk … at a wedding feast … And he never spoke again.’ Or: ‘King Henry the First was avaricious, revengeful, and so false that I suppose a man never lived whose word was to be less relied on.’ And best/worst of all, King John, who had just lost the Crown Jewels in the Wash, and feasted ‘in an immoderate and beastly way’ on ‘quantities of pears, and peaches, and new cyder’, … ‘in the forty-ninth year of his age, and the seventeenth of his vile reign, was an end of this miserable brute’.

Henry I, looking as though lampreys disagreed with him

King John, before he lost the Crown Jewels, presumably

Volume 2 takes us from Henry III (’the mere pale shadow of a King at all times’) to Richard III (‘usurper and murderer’ – England had to wait nearly 50 years for Sir Clements Markham), and Volume 3 from the Tudors to the Glorious Revolution, after which a very quick scamper past various Georges brings us to our own dear queen: ‘She was married to Prince Albert of Saxe-Gotha on the tenth of February, one thousand eight hundred and forty. She is very good, and much beloved. So I end, like the crier, with GOD SAVE THE QUEEN!’

Queen Victoria as a bride

The books lack illustrations, except for the rather crude frontispiece vignettes (see above – four out of five are the same in all volumes) by William Francis Topham, who was apparently better known as a water-colourist. This perhaps was an economy measure, but it is a pity, given the number and quality of historical illustrations being produced at the period.

A lively, if tragic, moment from the battle of Bosworth, in a nineteenth-century version

Maria Callcott had published a one-volume children’s book, Little Arthur’s History of England, in 1835, but I have to confess ignorance about earlier such works. I assume that they exist, or Jane and Cassandra Austen would not have had such fun guying them, but a quick Google hasn’t revealed much.

Was history (ancient or modern) not on the curriculum of young children – except of course what they picked up from ballads and nursery stories? Catharine Macaulay, in her 1790 Letters on Education, does not mention it as a subject. The closest Mrs Marcet got to history was political economy, though William Fordyce Mavor did produce a British Nepos; Or, Youth’s Mirror: Being Select Lives of Illustrious Britons in 1787, and his much re-printed English Spelling Book has a section on ‘epochs in history, from the creation of the world to [in the case of the version we have reissued] the year 1843’ (when the Thames Tunnel was opened, and the duke of Sussex – Queen Victoria’s favourite uncle, who gave her away at her wedding – died).

I suspect Dickens inspired many later narrative histories for children, most famously the somewhat inaccurate  Our Island Story (1905), by Henrietta Elizabeth Marshall: chronological, by reign (1066 to 1087, 1087 to 1100, 1100 to 1135 … gosh, I can still do it, sort of). But it’s also safe, I think, to assume that he also sowed the seed that was later to burgeon into the greatest English history book of all time: 1066 and All That, another serial publication (in Punch), subsequently published in book form in 1930. Certainly, Dickens’ judgments on Good Kings and Bad Kings are mirrored exactly by the forceful views of Sellars and Yeatman on Good Things and Bad Things!